Google Pixel 3 is a sales disappointment, sells less than the Pixel 2 - Ars Technica

Google Pixel 3 is a sales disappointment, sells less than the Pixel 2  Ars TechnicaCan the Pixel 3a save Google's struggling smartphone program? 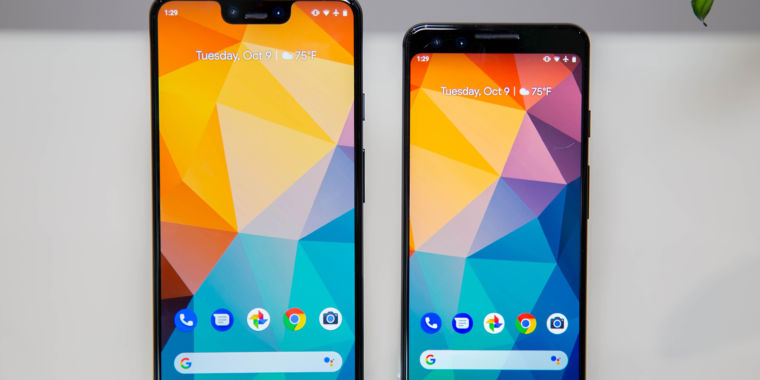 Alphabet, Google's parent company, had its yesterday, and, while these calls are primarily about advertising click-through rates and traffic-acquisition costs, yesterday's call actually contained some information about Google's smartphone sales. It turns out sales of the Google Pixel flagship are down year over year, meaning the Pixel 3 is selling worse than the Pixel 2.

Hardware results reflect lower year-on-year sales of Pixel, reflecting in part heavy promotional activity industry-wide given some of the recent pressures in the premium smartphone market.

"Recent pressures in the premium smartphone market" can mean a lot of things, but basically Google is admitting that there is some tough competition out there for the Pixel 3 and that the phone isn't selling as well as its predecessor. Google doesn't break out "hardware results" in its earnings report, so we can only guess at what the year-over-year difference is. It was bad enough to mention in an earnings call, though.

We of the changes in the Pixel 3. The smaller version was $799—$150 more than the Pixel 2 from the year earlier—and the larger Pixel 3 XL was $50 more than the Pixel 2 XL, or $899. For this extra money, Google downgraded from a metal back to glass, it stuck with a meager 4GB of RAM—the lowest of any Android flagship—and it even made some software blunders like locking users into its half-baked gesture navigation system (which it is still trying to fix in this year's Android Q release). To top it all off, the designs were pretty ugly, ranging from the dated Pixel 3 bezels to the outrageously large display notch on the Pixel 3 XL.

As for the Pixel 3's competition, Google has to deal with mainstream juggernauts like and —phones from two companies with a stronger focus on hardware, more carrier deals, and bigger advertising budgets. In the enthusiast market, Samsung offers higher specs, and OnePlus offers better value with a device like the .

Google's Pixel distribution network is also compared to the competition. Google sells the Pixel in only a tiny handful of countries, while its competitors have a worldwide presence. The Pixel 3 is for sale in a whopping and has zero retail stores. In the US, Google's only real carrier partner is Verizon. Apple, on the other hand, has a retail empire, with iPhone sales in 70 countries, more than 500 Apple retail stores, and iPhones in pretty much every single carrier store. Samsung casts an even wider net with the Galaxy S10, which is for sale in about , and again, just about every carrier store on Earth.

Investors weren't happy to hear about the lower Pixel sales. During the Q&A portion of the call, Justin Post from Bank of America even compared the company's hardware efforts to (gasp) Microsoft!

On the hardware business, I think there's some concerns that it's just not getting off to a really strong trajectory. [There are] some comparisons to Microsoft 10 years ago. Really, just help us understand how that hardware business is important to Google and how you're thinking about it long term.

After highlighting the company's success with Google Home, Sundar said the smartphone industry was facing a "headwind." He went on to talk about the general smartphone industry trends like foldable phones and 5G, but neither of those features will be exclusive to the Pixel.

What might help Pixel sales is a cheaper phone, which Google is planning to announce on May 7. At Google I/O 2019, the company will announce , a mid-range version of the Pixel with a cheaper SoC and a plastic body. We don't actually know the price yet, so it's hard to say if the phone will be a sales success, but at least it's something. Google has also aggressively been slashing the price of the Pixel 3 lately, with a happening earlier this month.

Gilead's CFO, appointed to Google parent's board, to retire - MarketWatch

New Google Gestures, the Capital One Hacker, and More News...