#BlockSidewalk's War Against Google In Canada  The NationThe tech company wants to rebuild a Toronto neighborhood—but residents aren't having it. 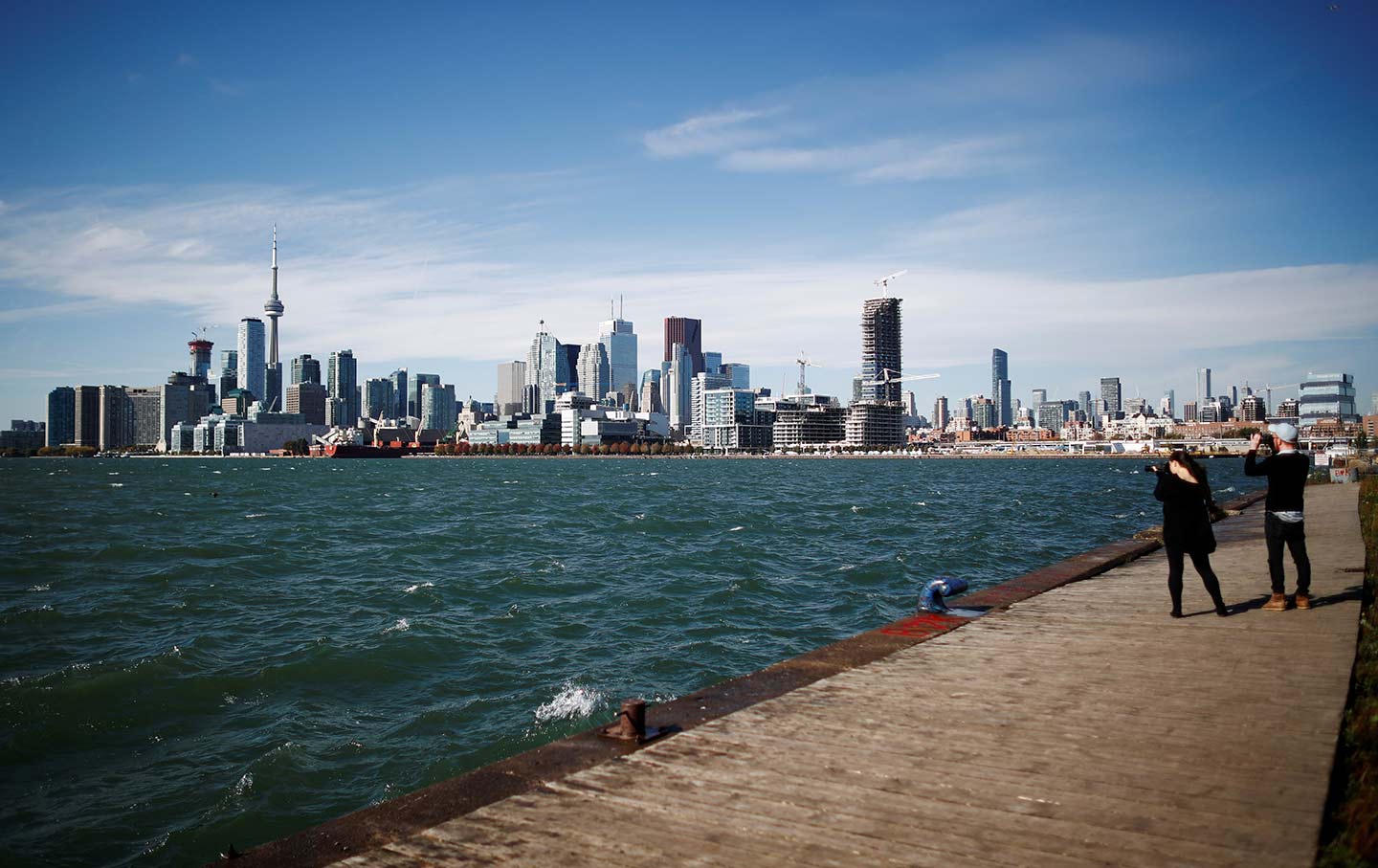 Thank you for signing up. For more from The Nation, check out our .

The Nation is reader supported: Chip in $10 or more to help us continue to write about the issues that matter.
Thank you for signing up. For more from The Nation, check out our .

Travel With The Nation

Be the first to hear about Nation Travels destinations, and explore the world with kindred spirits.

Did you know you can support The Nation by drinking wine?

In October 2017, Sidewalk Labs, a subsidiary of Google’s parent company, Alphabet, announced a partnership with the government agency Waterfront Toronto to map out a data-driven “smart city” on a parcel of land on Toronto’s derelict eastern waterfront, including 3.3 million square feet of residential and commercial space and a new headquarters for Google Canada.

Last week, 150 residents packed a community center in the city’s formerly industrial, rapidly gentrifying east end, vowing to block the deal from going forward. “We have a consent problem,” said Bianca Wylie, a lead organizer of the #BlockSidewalk campaign. “There needs to be the option to say no.”

As the bi- tech companies attempt to , campaigns like #BlockSidewalk in Toronto, and the activists who to build a second headquarters in New York City, are cobbling together a playbook for how to oppose these firms’ expansionist goals.

#BlockSidewalk’s first public meeting was part of a wave of resistance that has been building for the past year. The day before the meeting, the Canadian Civil Liberties Association against all three levels of government. At a press conference, CCLA executive director Michael Bryant called for a complete shutdown of the Sidewalk deal, saying the agreement between Google and Waterfront Toronto violated Canadians’ constitutional rights, and accused Prime Minister Justin Trudeau of being “seduced” by Google’s “honeypot.” “The laboratory of Sidewalk Labs, you see, is your community,” Bryant said. “Scientists profit from your behavioral data. Canada, Toronto, you are the lab rats.”

Initially, Sidewalk Labs promised to build an entire neighborhood “from the internet up.” Quayside, a 12-acre section of Toronto’s neglected but potentially valuable waterfront land, would be a testing ground for large-scale, high-tech infrastructure that has the potential to transform the very meaning of a city: Robots would deliver packages through underground tunnels. Buildings would adapt to the weather. Heated sidewalks would melt snow. Sensors would track everything from the number of available parking spaces to the times of day when people are most likely to sit on a park bench. The data gathered would be used to “optimize” city living and improve quality of life.

Sidewalk Labs has been toying with the idea of building a “digital district” for years. The company is the main investor in LinkNYC, the public Wi-Fi–enabled kiosks that have replaced most of New York City’s pay phones. At the official unveiling in 2016, Mayor Bill de Blasio touted the service as “the biggest and fastest network in the world—and completely free of charge.” But, as Nick Pinto , all that “free” Wi-Fi comes with a cost, as Google monetizes the kiosks by collecting data from anyone who uses them, a practice that has troubling implications for citizens’ right to privacy.

The same year LinkNYC launched, the digital media company the Information that Sidewalk’s CEO, Dan Doctoroff, was planning to solicit bids from different U.S. counties to build a “test bed” for smart city technologies. The company declined to comment on the reports, but two years later, it had signed a deal to invest one year and $50 million (U.S.) in a proposal for Quayside.

Almost immediately following the 2017 announcement, critics began to question the terms of the arrangement. Google was paying for the planning process; how exactly was it going to benefit from this potential deal?

Will Fleissig, the CEO of Waterfront Toronto—a tri-governmental agency that formed in 2001 with the task of developing 2,000 acres of post-industrial land bordering Lake Ontario—stepped down in 2018, just two years after he was hired. Several Waterfront Toronto board members and project advisors have subsequently been fired or quit; some of them later joined the #BlockSidewalk campaign.

The flashpoint came in February of this year, when the Toronto Star leaked documents that showed Sidewalk Labs had far more extensive designs on the city’s eastern waterfront than the company had made public. The documents confirmed critics’ fears that Sidewalk had its eye on not just Quayside but the surrounding Port Lands, a 350-acre stretch of partly contaminated post-industrial land that could be worth billions. In exchange for financing this expansion, the company proposed taking a cut of property taxes and development fees—even though, as #BlockSidewalk has noted, the development of the Port Lands is only possible thanks to a taxpayer-funded flood prevention plan that’s been underway since late 2017.

At last Wednesday’s meeting, city councilor Paula Fletcher, whose ward includes the Port Lands, described Sidewalk’s actions as a “fairly significant land grab.” When Waterfront Toronto issued its request for proposal for a funding partner on the Quayside project, it only specified those 12 acres, not the surrounding eastern waterfront, an area equivalent in size to Toronto’s downtown core. The plan, Fletcher said, “wasn’t to turn over the Port Lands or any section of the waterfront to Google.” She added, “Shame on them, and shame on this process having gotten so far in secret.”

If you like this article, please give today to help fund The Nation’s work.

Wylie, the organizer, acknowledges that the sheer scope of Sidewalk’s plan presents a challenge to the #BlockSidewalk campaign. The town hall was an opportunity for residents with different concerns about the project—from affordable housing to public health to data collection—to meet each other and organize breakout groups. Adam Vaughan, the member of Parliament who represents Toronto’s eastern waterfront at the federal level, attended the meeting. His biggest concern, he said, is “this notion of surveillance capitalism—data harvesting and how public life is being turned into private wealth.”

He pointed out that Toronto as a city, and Canada as a country, lacks a legal or policy framework around data and collective privacy. “One of the concerns you hear from the data companies in this city is that they’re afraid Google’s going to come in and knock them out of the market,” Vaughan said. Sidewalk’s proposal has helped spur this conversation; following the February leak, City Council approved a motion to develop a municipal policy framework governing digital infrastructure.

But for Wylie, that’s not enough. She sees the Sidewalk Labs proposal not only as a threat to citizens’ privacy, but to the democratic process itself. “Cities should be planned and organized and run based on relationships between residents and their governments,” she said. In an interview, , a journalist and professor who’s covered the politics of City Hall for years, pointed out that when Google offers to pay for public transit, or to build out Toronto’s long-neglected waterfront, many citizens and local politicians are likely to see that as a good deal.

Google, he said, is “taking advantage of the fact that this is really public land and should be a public investment, but that’s not generally the way governments are working these days.”

As the big tech companies continue to woo local governments with promises of economic benefits, jobs, and infrastructure, activist groups will need a roadmap for resistance. “The reason these tech companies present something that’s a little bit different and challenging is that they may be able to do a lot for independent groups,” Wylie said. “But where we all lose is when we’re starting to privatize our government.”

Sidewalk Labs is expected to deliver its final plan to Waterfront Toronto within the next month, although it’s already six months behind schedule. #BlockSidewalk hopes the agency will reject the proposal in its entirety. But Wylie doesn’t want to stop there. She and her fellow activists want to empower Toronto’s residents to envision their city’s future on their own terms, not Google’s. “Part of this campaign is not just saying no to the company and the process here,” she said. “It’s saying yes to how we want to build our city.”

Freshman college student among those killed in Seattle...

Lyrics Site Accuses Google of Lifting Its Content - The...

Google confirms ads are coming to your Discover feed for...